A Vicious Cycle of Destruction

First, there was the forest, logging came; bare lands appeared and mining companies came. What’s next? This idea has been in my mind when I revisited Midsalip in January this year to film and produce a short video on the struggle of the indigenous Subanens and the people of Midsalip against mining. My first visit to Midsalip was in the 80’s during the picket against logging companies. Talking about education, that has been the most educative experience in my life about the care of environment.

I had the privilege to attend to the court hearings in Aurora and Pagadian City and meet with all the accused, among them the Subanen leaders, Columban sister Patty Andonaire and Columban priest Sean Martin. Mining company has filed a criminal and civil case against them.
I spent a night in the picket area in Guinabot, Midsalip and had the chance to interview Ricardo Tolino, one of the Subanen leaders respondent to the case. Fruit of this interview is this video. Pagmina o Kasiguroan sa Pagkaon ug Kaugmaon? (Mining or Food & Future Security). In July the Mining Company managed to get a Temporary Restraining Order and has forced the picketers to abandon the proposed mining area. The drilling has started. The struggle now is to support the Writ of Kalikasan for the Zamboanga Peninsula.
The Writ of Kalikasan is a remedy available to a natural or juridical person, entity authorized by law, people’s organization, non-governmental organization, or any public interest group accredited by or registered with any government agency, on behalf of persons whose constitutional right to a balanced and healthful ecology is violated, or threatened with violation by an unlawful act or omission of a public official or employee, or private individual or entity, involving environmental damage of such magnitude as to prejudice the life, health or property of inhabitants in two or more cities or provinces. (Rules of Procedure for Environmental Cases A.M. No. 09-6-8-SC Rule 7, Sec. 1)

I was assigned for seven years in Brasil and eleven years in Peru. Both of these countries have gone through the same pattern of destruction, first sending people to colonize virgin territories of forest, then came the logging business, cattle raising and finally the mining. Forests were denuded at tremendous speed, driving the indigenous people to death and to nowhere. After the timbers were cut, greedy corporate interest were turn to minerals, digging open pit mining, rerouting, killing and contaminating rivers. A desolate land, dried rivers, tons of poisonous mercury and cyanide were left to replace what was once the lungs of the earth. Amidst this destruction, human community continue to produce unknown martyrs for the defense of the forest and the indigenous people, among them Chico Mendez and Dorothy Stang who recently have shed their blood.
I have just returned to the Philippines after almost 18 years of being away as Columban Lay Missionary.  The Philippines did not escape from this pattern of development. Mining companies have spent millions in propaganda to present a responsible “clean” mining, hiring private security guards,   national and local government officials were bribed to promote their interest. Philippines have produced a lot of martyrs too, from media men and women, NGO leaders, religious etc.
Click this link for the video.
- November 27, 2011
Email ThisBlogThis!Share to TwitterShare to FacebookShare to Pinterest

It takes a lot of guts to do the right thing, sir, and i commend you for what you do and have done! I have been aware of the perils of logging, especially after the whole incident of the storm hitting Mindanao happened. I was quite shocked, and this further pushed my desire to help people there, not only physically, but spiritually, in whatever way I can. I have gone to Mindanao only once in my life. It was September last year and one of the first questions that I was asked was, "It isn't scary, right?" I guess that has been the stigma that has been tagged on Mindanao due to all the aggression from the rebels and the government. It was beautiful, as I realized when I landed at the Surigao Airport. And the appreciation overwhelmed the fear. The thing is -- not many people are fighting to keep these places beautiful. Instead, to make some money, people destroy these and rationalize that "there are many more trees out there anyway", as though they wont end until there are no more, which is intolerable! 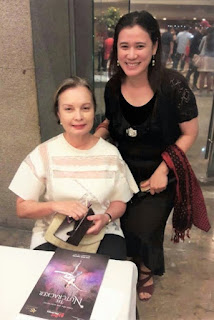