Korean Lay Missionaries Noh Hyein (Anna) and Kim Sun Hee (Sunny) are back from their home holiday after their initial three years in the Philippines.  During their first term, Anna worked with St Peter's Parish (Novaliches, Quezon City) and Sunny worked with the Immaculate Conception Parish (Barretto, Olongapo City). Both are taking English refresher course.


Ana Belma Flores returned to Manila also after a four months home holiday in her native Peru. Shortly after her arrival, she signed  a three-year contract as a long term Lay Missionary. Ana worked in Mindanao during her first six years in the Philippines.  She is currently taking English refresher course in Quezon City.


Arlenne Villahermosa is the new CLM coordinator. Arlenne served in Korea for four years (2002-2006), Philippines as CLM Coordinator for two years (2006-2008), Myanmar for four years (2008-2012) then came back to the Philippines in 2012 for health reasons.  We are happy that she has fully recuperated  and we  wish her well as she, for the second time, takes on the role of CLM-Philippines Coordinator.  Arlenne is  also  involved in facilitating the  Awakening the Dreamer workshop, inspiring and educating participants for responsible living and caring for the earth.

Aurora Luceño continues to work with the CLM Vocations Ministry in Mindanao. She is  preparing to defend her thesis in order to complete her Masteral studies at the EAPI (East Asian Pastoral Institute). She represented CLM-Philippines in the recent CLM International Conference held in Seoul, South Korea.


John Din, whose last assignment was coordinator of CLM  - Philippines (2011-2014), finally took a sabbatical leave to pursue a Masteral Programme in Science and Religion in the United Kingdom. John was assigned in Brazil for six years and Peru for another eleven years  before he was re-assigned to coordinate the CLM-Philippines from June 2011 until May 2014.


Nani Mounga  continues to work with  Malate Parish and involved in its different programs such as BEC, with the youth, street children, clinic etc.  She is also taking lessons in photography under the guidance of Mr. Mel Bacani and the whole Malate Production team to hone her skills  in shooting pictures.  Her midterm evaluation is coming up soon.

Michael Javier, Lorna Cañete, and Gilda Comayas (PH22) are finishing off with their one semester of formal studies in philosophy, social issues, gender issues, and inter-religious dialogue at the Institute of Formation and Religious Studies.  They will start with Clinical Pastoral Education on September 29, 2014 at the National Kidney and Transplant Institute with Sr. Marie Therese Yusay, SPC as their supervisor.


RP19, composed of Reina (Reins) Mosqueda, Sherryl Lou (She) Capili and Joan (Jo) Yap completed their first term in Taiwan and returned to Manila in June 2014.  They have expressed their desire  to renew their commitment for another three years.

- September 22, 2014
Email ThisBlogThis!Share to TwitterShare to FacebookShare to Pinterest 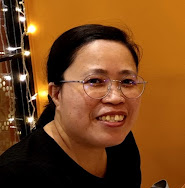