Why RP18 is returning to Britain

During the Eucharistic Celebration for RP18's renewal of commitment,  Ger, Jayjay and Rose shared what made them decide to return to Britain for another term. Read what they have to say. 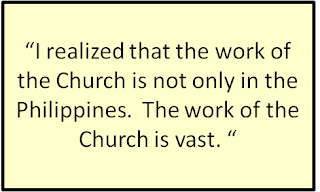 It’s been really great to be in Britain and I feel blessed and privileged to be able to insert in a multicultural place. We were assigned in Birmingham, a multicultural place. When I arrived in Britain, I was asked to live with a Chilean. It was great to live with another culture and living with another culture is mission in itself for me because being a Columban is crossing boundaries, gender, creed and culture. So when I was asked to live with a Chilean and she was 10 years already in Britain and I was new. At first I was hesitant and I asked myself if this would be a big challenge. But I appreciated living with another colleague.  It was great. Living with a Chilean gave me the opportunity to learn another culture, another language, another “everything”.     This is what I appreciate in being a missionary. I joined the Columban Lay Missionary because somehow it grasp my charism as a Christian. I was involved In the Philippines in Catholic activities so leaving the country makes me feel guilty so even now that I am in the Philippines I am a bit shy of meeting my colleagues in the catechetical center where I used to work as a religion teacher.  But I realized that the work of the Church is not only in the Philippines. The work of the Church is vast. So the idea of this exchange of missionaries is really great. People are going and coming, learning another culture. The best thing that I appreciate, the best thing is I really  learned that somehow makes me want to go back to Britain is I have the opportunity to celebrate with people of other faith and culture.  In the Philippines, I do not have that avenue to do that.  We are 80% Catholics here and I am always surrounded by Catholic people. I miss that. When I go to my province, when I go everywhere I always meet Catholic people, Christians. But in Britain everyday I am always with people of other faith and culture and it is interesting to be with people of other faith. I think this is the challenge.  The Church is not only  a group of Catholics. So it is really great. So now that I am going back to Britain, I am happy and I am proud I am a Columban and I thank the Columbans for having me. I am learning, I am growing here and I am happy.


When I reflected on  this, it seems like He reminded me that those things that I  use as excuses not to go back are the same excuses I use when I am about to enter. I was really thinking,  “Lord should I really enter or not? I also have my own plans you know.” But then God made me realize that His mission is more important. I don’t know if you want to know my excuses but maybe I’ll mention some of it.

One, I said “I want to do further studies. I want to do my PhD.”  God replied, “Everything will pass away but my words will not.”  So I realize that of course studying is important. You keep on updating but you have to study also the word of God and share it to others and it’s something that never go passé. And I said, “Oh guess you’re right.” 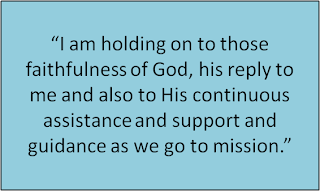 And then  next, “God, I think I am already old now.  I am already 40."  Ten years ago, I want to enter the Columban Lay Missionary and I did call the CLM. But then maybe it was not yet time for me to enter that time. But then the call returned back and then it seems like it was telling me to do something new, something  that I have never done before.  But I said, "Lord I think I am already old now. I am ten years older than before." But then He led me to the story of Abraham. Abraham was 75 when God called him. Okay I am younger than Abraham. I am just 40. So okay.

And then I said, "O God  I still want to have my own family  and have my own children. It would be too late if I postpone it."  And He led me to the story of Sarah. Sarah was 90 when she gave birth to Isaac.

And I am starting to get scared. “Lord is it really you speaking?"  Maybe I am just imagining things or is it just coincidence.  And then He led me again to the story of the disciples wherein they were so scared because they saw Him and they thought He was a ghost.  Do not fear. It is I. Okay.  You are really calling me.

When we had our re-entry, these same things came back to me, same excuses.  God made me realize that He already answered those things.  And this is the same thing that I hold on to as I decide to renew. Of course there are many concerns like my mom is already old. But then my younger brother volunteered to live with her so she will no longer be alone in the house. So all my excuses?  God took care of it.  Even the further studies I would like to do.  There are several people calling me, “Can we have a copy of your powerpoint presentation of your thesis. I would like to include to my presentation for my further studies." It seem like God is telling me that He had  assigned some people to take care of that and I should not worry about those things until I came out with nothing anymore to say as an excuse. So I said I will finalize my decision on Sunday. I would  try to find out what is the gospel and the message of God to me. And the message was Jesus sending out His disciples two by two.  And so I said “So it is really you speaking and telling me to go back.”   And as I recall His reply, I also recall His faithfulness, this is why we were also able to finish our term in Britain.

I am holding on to those faithfulness of God, his reply to me and also to His continuous assistance and support and guidance as we go to mission. Hopefully, and I know it is the same God, the same faithful God who will be with us in the next three years. 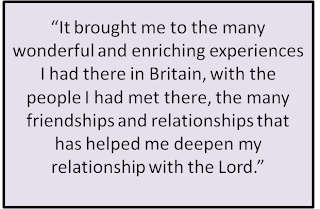 My initial response was “Actually I do not want to go back.”  But then God is so faithful that I heard God speaks in my heart  “Jayjay, are you sure you do not really want to go back.” And it made me reflect again and it brought me to the many wonderful and enriching experiences I had there in Britain, with the people I had met there, the many friendships and relationships that has helped me deepen my relationship with the Lord.  So I guess that’s what pushed me through to go back and ride the plane again.  But I am really thankful to God for all his blessings because at first when I left the Philippines my traditional thinking of being a missionary is go to Britain and teach about God. But when I reached Britain, God was already there before me.  And I learned so many things even in the face of my Muslim brothers and sisters. I remember one instance  when a Muslim woman said “Jayjay, you know what? The bible is the best book that you can read.”  And I was struck with that coming from a Muslim woman. There are many experiences there especially the hardships of people especially coming from different countries especially those asylum seekers who are seeking a good life but when they reach Britain they feel so lonely because they left their families back home and it is not easy for them  to go back to where they came from.  And so it touches me because it is an invitation for me to be a family, to be a sister, to them.  I would like to take this opportunity to thank the Columban family for their prayers and support.  I am inspired to see former lay missionaries who are here, and Columban sisters, my friends. It gives me the strength, the courage that this is really God’s mission and your all there through your prayers and support. I would like also to thank my family back home my parents, my brother and sister. I know they are also part of this mission for sending me and the parish people. I don’t want to cry because I have my make-up on.  Thank you and please continue praying for us.
Please see full video here.

- September 21, 2013
Email ThisBlogThis!Share to TwitterShare to FacebookShare to Pinterest