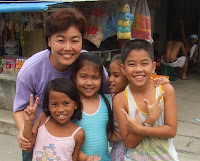 Below is the life story of one of the Columban LMs. Kyung Ja Lee never imagined a life outside Korea much less a missionary life in the Philippines. But all these changed after the death of her father.

"I grew up in a family which believes in Confucianism. I lived with my parents, five siblings, a grand-mother and two cousins in a small house. My father did not have a regular job, so he went where he was given work. Most of the time, my mother was out to find work, too, so I had to help in all the household chores. There are even times I had to work at my aunt’s house for food.

Although we were poor, my parents sent us to school believing that education is the only way for a better future. After graduation, I worked as an accountant. Gradually, I was able to support my family and save enough money for my future marriage. I was financially well-off and began to enjoy my social life.

In 1992, we learned that my father had stomach cancer. Though we were not Christians, we prayed to God and asked HIM to help my father recover. It was the most difficult time for us. He underwent an operation but he died two years later. He received the sacrament of baptism shortly before he died.

After my father's death, my mother, younger sister and I decided to become Christians and we were baptized in December of 1994. Even though I did not know much about God then, I worshipped Him. I attended mass every Sunday. I became a member of the choir and the Legion of Mary. I helped build houses for the disabled and visited lepers. I enjoyed these church activities. However, I felt that something was missing in my heart. So I started to look for that something I had not been able to name.

While I was looking for that something, a religious sister gave me a book about Yeon Shin, a Columban Lay Missionary who died in Fiji. I was inspired by her missionary story and that changed my life.

Her story showed me another kind of life. I wanted to be a missionary like her. Joining the Columban Lay Mission had not been an easy decision because I had to leave my family and comfort zone, including my job which I had for 17 years.

After the nine-month orientation program, I was sent to the Philippines. I was assigned in Malate church where I was involved in BEC in my first term. In my second term, I went to the Holy Spirit parish (non-Columban) in Quezon City where I was involved in Youth and Children programs. It was difficult to adjust to the new culture and learn two languages at the same time, but I learned a lot about how to live the Filipino way of life and work with people in the community. I am now a better person because I have experienced God’s love through the Filipino people I served.

I feel so blessed and happy with my life now. I am also glad and grateful for having a family who is very supportive of the life I have chosen, even though they are not all Catholics.

I thank God for calling and giving me the opportunity to live with the people here. God took my loving father away but He gave me the leap of faith and life. God called me to be a missionary through the life of Yeon Shin. "

Truly I say that God has a way of orchestrating the different races in our lives. He just wants us to do our part. In return, we should also trust HIM for the result of the race. Kyung Ja was able to rise above her circumstance and coming out triumphant. Life is sweet. Now Kyung Ja is in her 9th year of mission work in the Philippines and working full time with the JPIC with special focus on migrants. While Yeon Shin was not able to continue walking the path she chose, she inspired Kyung Ja who became God's instrument to continue Yeon Shin unfinished walk. Kyung Ja has had other races in her life, some very recent in fact, but her faith had helped her through all these.
- July 26, 2009
Email ThisBlogThis!Share to TwitterShare to FacebookShare to Pinterest