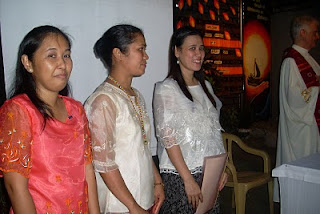 On Sunday evening May 23, RP18 Ger, Jayjay and Rose sealed its partnership with the Missionary Society of St. Columban by signing an agreement for a three year commitment to Columban Lay Mission.
Kyung Ja Lee welcomed everyone. Fr. Pat O’Donoghue presided and represented the Missionary Society of St. Columban at the mass. Present were family members, friends, other Columban Lay Missionaries, returned Columban Lay Missionaries, Columban Sisters and Columban Priests. Sacred Heart Seminarians provided the basis of the choir as Columban students were on vacation. Three new Columban candidates also attended.
Fr. Pat, in his homily focused on the cenacle within us, of deepening our faith, and  trusting in the Lord.  He believes that everything  that happened to RP18 are there for a reason. Waiting is a grace. We must learn the value of perseverance.
RP 18 took their oath and each was presented with the lay mission cross pin.  After communion they signed their agreements.   Other Columban Lay Missionaries present renewed their own commitment.  There was also a powerpoint presentation attempting to show RP18's  nine months journey of many firsts, surprises, learnings and growth, of pains but more joys.  Ger also took time to explain the symbolism of the three baby shoes which were made as offering.  She said, 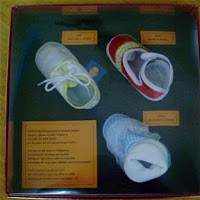 After mass, refreshments were served followed by dinner. RP 18 will be going on mission to Birmingham, England.
Please see photos here.
- May 25, 2010
Email ThisBlogThis!Share to TwitterShare to FacebookShare to Pinterest