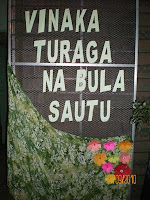 Fijian seminarian Martin can't believe his ears when he learned that the Columban Gathering for October will especially celebrate Fiji National Day.  Who can blame him? There is only one Fijian, and that is him,  in the Columban Community.  Perhaps he has forgotten that two of the lay missionaries are half-Fijian.  There is  Rowena "Weng" Cuanico who was assigned in Fiji for nine years and whose heart was partially left there. And of course there is Nani Mounga from Tonga who had her CLM orientation in Fiji in 2005 along with 4 other wannabes. 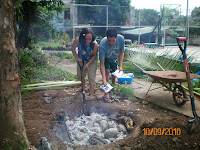 The day started early to prepare for lovo cooking or underground cooking.  Good thing is that digging is no longer necessary since a pit for this purpose is already available in the Formation House.  But there was more to do than just to dig.  The ground was lined with heat resistant stones. When the stones were burning hot, fish, meat and vegetables wrapped in banana leaves were placed in the pit.  The pit is then covered with soil and left to cook slowly for 6 to 8 hours.
Mass began at 5:00pm.  It was celebrated by Tongan priest Fr. Tino who came all the way from Tagaytay to show his support for Martin and his community.  This was immediately followed by the ceremonial kava drink.  Dinner consisting mainly of the lovo food followed.  Then dance, dance, dance.
More photos here.

- October 12, 2010
Email ThisBlogThis!Share to TwitterShare to FacebookShare to Pinterest

If the cooking isn't up to standard is the cook thrown into the pit?!

Perhaps. But lovo food has been great so far.