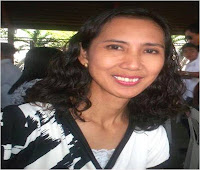 Florence “Fong” Balaoing  joined the orientation in 1994.  She was one among the four women and two men who initially made up the 4th team of Filipino lay missionaries in orientation.  They were collectively known as RP4.   Although four completed the orientation, only three were actually sent on mission to Britain in February 1995.  The three were Jasmine Lood of Iligan City, Val Carancio of Iloilo and Fong Balaoing of Dasol, Pangasinan.   While in Britain, Val and Fong fell in love with each other. They got married in November of the same year.  It was a very difficult time for them and everyone involved with the Columban Lay Mission program in Britain and in the Philippines.  While everyone recognized the contribution their presence made to the progress of the Columban lay mission and to the better collaboration between the Columban priests and the lay missionaries there, everyone was also  aware that lay missionaries were highly encouraged, or better yet, expected  to retain their civil status especially during their first term.  Most Columbans in Britain wanted them to stay and continue their mission work as a couple.  After much dialogue between the two regions, decision was reached that Val and Fong must return to the Philippines. With heavy hearts, Val and Fong came home and left the Columban Lay Mission.   “Amidst what happened, I am very grateful to the Columbans. It was with the Columbans where we experienced growth the most.  The orientation alone enriched us immensely. We met wonderful people who inspired us. Our life in Britain was not only a time of pain but also of discovery and joy” Fong shared.

After Britain, Val and Fong moved to Dasol, Pangasinan. They welcomed their first child in June 1996. In July of the following year, another child blessed their family.  Fong found work in a local high school.  Although Val had a chance to work as a seafarer having studied associate in marine engineering, he  decided against leaving his young family.  Instead, he set up his own business fabricating steel windows, gates and doors.  And all these times, they never stopped wishing that one day they will still realize their dream of becoming missionaries.  Sometime in July 1998, they sent Columban Lay Mission coordinator Fr. Michael McGuire a letter inquiring about the possibility of their family joining the Columban Lay Mission once again.  They could have not been more delighted when Fr. McGuire replied and expressed a possibility indeed of their joining the orientation program.  After several meetings with Fr. McGuire, the young family of Val and Fong were invited once again to join the orientation program. They returned to the CLM house in September 1998 and became part of RP8, the 8th team of Filipino lay missionaries in orientation.

Everyone at the CLM house welcomed them with open arms.  Everyone helped this young family blend with RP8.  Everyone made them feel right at home.  Everyone was willing to help Val and Fong even with baby sitting sometimes.  Although some Columbans were curious how they came to the CLM once more, most were actually glad to see them back.  Their return “home” unfolded right in front of me.  Val and Fong were aware of the challenges ahead but they also had so much to hope for with this new grace and opportunity.  I personally thought that a second Filipino Family on mission will be realized through them.  But the orientation presented itself with more challenges than they had envisioned.  Most of these challenges arose as a result of their circumstance as a young family.   Their focus was challenged especially during studies, seminars and inputs.  Although they agreed that one should always be present for any activity, several times this did not happen.   “Staying focused was difficult with two very young children” Fong said.  “This was reality and we cannot change it.  We were just grateful to the Columbans for giving us another shot at mission work. We could not have been any happier.  We gave ourselves until December 1998 to sort things out.  But it did not take us that long to realize that mission work for us was already with our children Diana and Julea.” For the second time, Val and Fong left the Columban Lay Mission.   This time, however, they left not with heavy hearts but so much joy and gratitude.   “We felt so much blessed. We were renewed. However short our stay with the Columbans this time,  we believe this time deepened our faith  and being as  missionaries. We were inspired to be better individuals and parents to Diana and Julea.    From that moment on, we pledged that our mission was to be responsible parents to our children.”

Few years later, they were again blessed with another daughter.  Later, they joined the Focolare Movement and committed to live a life based on the spirit of love and service.  They moved to San Fernando, La Union in 2005 as part of their commitment to the group and are now residing in one compound together with six families which they have been tasked to literally look after by the Focolare. Val and Fong’s devotion to each other and their children is a powerful example to emulate.  They act like parents and counselors to the other six families.  These six families used to live a vagrant life but were given a new lease of hope when they were welcomed to live in the Focolare Compound.   With the help of their fellow volunteers / members, Val and Fong have sought to fulfill the needs of these families  based on the principles of education, formation, solidarity, and unity.  Regular sharing is held to aid these families re-integrate with the community as responsible citizens.  One challenge they had as Focolare volunteers happened very recently when one mother died leaving behind eight (8) very young children.  They all pitched in, financially, emotionally, physically to help this family  overcome this tragic event.  “It was a tough time but this experience has borne compassion among us, and resilience and tenacity to the eight children” Fong said.

Val and Fong’s eldest daughter Diana is now a second year college student taking up nursing at St. Louis University, Baguio City.  Julea will enter college this school year and hopes to join her sister in the same school. And the youngest daughter Marie is in high school.  Fong is seeking a teaching job overseas to be able to respond to the growing financial needs of the family.   Val will carry on his steel fabrication business in San Fernando.

Thank you Fong for your  wonderful visit. Thank you for coming home.

By Mavic Mercene,CLM Staff Member
- May 12, 2013
Email ThisBlogThis!Share to TwitterShare to FacebookShare to Pinterest

It is wonderful to read the story of Fong and Val. It's been 15 years since the orientation in 1998. I was one of the members of the Rp 8 on orientation that year. I do remember Diana and Julea when they were small.
Beautiful girls, now grown ups.
It is wonderful to see them even in photos.
Thank you Ate Mavic for sharing this to us.
All the best. God bless. Angie