A Glimpse of Love for the Unseen


On September 29 ~ October 19, 2014, the Agape Center for HIV and AIDS Education and Outreach Ministry of the Hsinchu Diocese and Harmony Home Foundation Taiwan, a non-profit organization sheltering people living with HIV and AIDS in Taiwan and China, collaborated in holding a charity art exhibit entitled: “A Glimpse of Love for the Unseen,” showing 22 artworks which include oils, charcoals and photographs, to raise awareness on HIV and AIDS.  The exhibit was held in two venues, the first was in Hsinchu City and the 2nd was in Taipei city. This event was a good opportunity for people from different communities to understand the realities of HIV and AIDS and to be in solidarity with people living with HIV and AIDS. 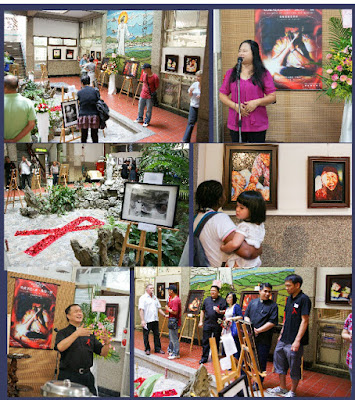 It is with a grateful heart that I share with you the reflection I’ve written for the exhibit introducing my collection:

“Since coming to Taiwan as a Columban lay missionary, I’ve had the opportunity to journey with people who live in the margins of our society. People from different walks of life having one thing in common  – they are people living with and affected by HIV and AIDS.

It was in Harmony Home where I worked for 5 years as a full-time volunteer, that my eyes and my heart were opened to how the realities of HIV and AIDS have deeply affected  thousands of lives in Taiwan, China and in other parts of the world.

Most of the artworks I’ve created are captured moments in the everyday lives of people living with and affected by HIV and AIDS. The portraits are of faces unseen by our society. Most often, we see them under statistics or demographics. But they are more than just numbers – they are somebody’s family, relative, neighbor or friend. From newborn babies to teenagers, single mothers to old people. Each person has a sacred story to tell, be it their struggles or fears, joys and dreams.

Facing the Truth
Stigma and discrimination against people living with HIV and AIDS is what fans the fire of this epidemic. For many people, it is easier to ignore what is happening right before their eyes than face the reality; for others, it is more bearable to push people who are different from them outside their circle, hiding behind their walls of indifference. Sadly, many still believe that HIV and AIDS has nothing to do with them or their loved ones.
The truth is, we are all vulnerable to HIV. All of us are affected by the epidemic. Each person’s attitude, behavior, actions, and choices affect others,  which also affect our community. So if one of us has HIV, then all of us have HIV.

Finding Hope
In deepening our awareness of how HIV and AIDS is affecting lives, we can begin to understand our own important role in fighting this epidemic.

Having witnessed how HIV has drastically affected thousands of people, young and old, I hope that this exhibition can open more eyes, more hearts into seeing that there is hope after HIV and AIDS; hope in stopping the spread of this illness – and that hope lies in each of us taking action now.

Witnessing Love
This exhibit is also a tribute to the good works done by many people who have been working in solidarity with people living with HIV and AIDS. Their acts of kindness and compassion, untold in news or in the media, but nevertheless, they are the ones who continue to give hope to the hopeless, healing deep wounds caused by fear and ignorance.

It is humbling to witness the power of love overcoming the challenges of HIV and AIDS in the lives of people living in the margins of our society.
True Love compels us to action. I hope that more people may find the courage to  face the challenges brought about by HIV and AIDS, as well as value  the life, love and dignity of each person, including people living with and affected by HIV and AIDS.”
- June 18, 2015
Email ThisBlogThis!Share to TwitterShare to FacebookShare to Pinterest