Seeing What is Right in Front of Us 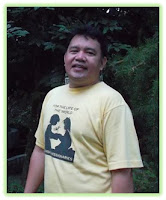 I had the privilege to visit the Punduhan (Stopover) ng Mga Dumagat Center in Norzagaray, Bulacan as part of the elaboration of an Eco-spirituality module that the Save Sierra Madre Network Alliance is developing. The module is based on the practices of the Dumagat, a tribal group that lives in the Sierra Madre mountain ranges in the island of Luzon, Philippines. I went with the organization with a concrete program in mind -- to conduct a workshop with the indigenous group with a view of drafting a spirituality based on the way of life of the Dumagat.

We arrived at our destination on a Friday evening in the middle of torrential rains. Mud was everywhere, even inside the makeshift school and small houses that served as our sleeping area. This sight raised a concern to me as to what would happen the following day. Would there be a suitable place to hold our planned workshop that was free from rain and mud? Would this planned activity be a failure?

I slept over with this preoccupation in mind in a small nipa house, a typical stopover place of the Dumagat, designed mostly for resting and sleeping. This is an integral part of their nomadic way of life. I was lucky I was offered a sleeping bag to keep me from the cold winds brought about by the rain. I woke up the following day still with the same preoccupation in mind.

While waiting for our activity to start, something happened that just imbued me with a sense of awe and wonder looking at what seemed to be familiar and natural. I saw the Dumagat children walking around as if everything was fine despite the non-stop rain and mud inside the school caused by the water coming in. After seeing the kids playing in the rain barefoot, I saw, or maybe it was revealed to me, how there was simply an inner homeness in their habitat, not an uneasiness of the natural world.

Homeness is not only defined by the walls of the nipa house but extended to the natural world. This is indeed a very different concept compared to our current technocratic paradigm where we shield ourselves from a world that is becoming stranger to us. Our security is based on the walls we build.

In contrast, the Dumagat is very at home with the weather, the animals, the trees and everything that surrounds them. There is nothing strange to them. Home for them is everywhere in the Sierra Madre mountain ranges. Their habitat is their home. Thus, defending the Sierra Madre mountain range is to defend and ensure the existence of the Dumagat tribe. Currently, Sierra Madre is threatened with continuous illegal logging, mining, land grabbing, road construction and the construction of a dam supposedly to ensure the water supply for Metro Manila.

Indeed, the mindset that promotes these wanton destruction is alien to the Dumagat people. This experience has taught me that the spirituality of the Dumagat tribe expressed in the reverence and respect towards the natural world is deeply grounded and rooted in their habitat. We were there with the task of putting words to their experience but we found the limits of  words to describe  an inner at-homeness with the natural world. I waited for the Dumagat to tell me how they come to have a way of life that is one and connected with the environment, but instead, they have shown me their innate ease with the natural world. I was grateful for that gift to see what was right in front of me.

Indeed, the Dumagat people as well as the different indigenous peoples around the world, particularly those in Peru and Brazil with whom I had the privilege to meet, have a very important lesson to teach us – to rediscover this sense of at-homeness with the natural world, with creation, because we are a part of it.

(This article first appeared in Laycom, January 2017)
- May 08, 2017
Email ThisBlogThis!Share to TwitterShare to FacebookShare to Pinterest