Partnership: Columban Way of Being on Mission 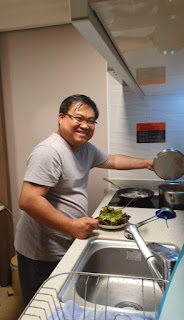 These are just some of the thousand encounters I have with Columban lay missionaries. I have known the lay missionaries (LM) to have come from the Philippines, South Korea, Ireland, Britain, Fiji, Tonga, USA, Chile, Peru and a team from New Zealand.

It was Noh Hye-In Anna who encouraged me to write something on my experience being with Columban lay missionaries. At first, I hesitated because, being an ordained Columban missionary, I consider it normal to journey with lay missionaries. I thought it is not worth writing about. However, on the second thought, maybe it is, so that by doing so, the partnership enshrined in Columban official documents may have some flesh on it. I would like, therefore, to highlight some of the things I consider significant missionary journey with the Columban Lay Missionaries.

Being with Columban Lay Missionaries during Formation Years:

It all began when I joined the Columban Initial Formation Program in the Philippines. It was particularly at the stage where I had to go to Manila for the Spiritual Year Program and do Theological Studies. It was in Manila that I began to meet lay missionary teams from South Korea, Fiji, Ireland, Chile and Britain. Of course, there were also Filipino LM teams on the orientation program for cross-cultural assignments. What was delightful at the time was the initiative of our Rector and LM Coordinator. Once a month, the Columban students and LMs took a turn in hosting this gathering. It was known at the time as the “Tuesday night”. The monthly gathering was a simple occasion of sharing food, singing and dancing. For me, it was truly an experience of inter-cultural exchange where we could celebrate our diversity. Liturgical celebration was another occasion where I, as a student and LMs, teamed up in the preparation. My formative years in the Columban culminated with my ordination to priesthood together with my classmate Rolly Aniscal on December 29, 1998. In the ordination ceremony, Rolly and I were blessed by two women. One was a Columban nun and the other was a Columban lay missionary. The lay missionary was Venus Guibone. Venus was one of the Philippine LM team assigned to Ireland. I would say it was one of the most touching and humbling moments in the ordination ceremony.

Last year was my 22nd year as a Columban missionary priest. My missionary journey seemed to move fast. I remember my first year as an ordained missionary. I was full of enthusiasm and could not wait to leave the Philippines for my mission assignment in South Korea. When I arrived in Seoul in 1999, there were already LM teams from the Philippines and Ireland. And all of them were engaged in various pastoral works. Their commitment to the Columban mission and warm hospitality was infectious. There was also a Korean team on orientation for cross-cultural assignment. Wow, I just enjoyed the vibrant and dynamic contribution of the LMs in the Korean region. In 2004, I went back to the Philippines for the home region assignment. The 3-year rotation plan got extended to almost 10 years! Thanks be to God, I was appointed again to South Korea in 2013. And since my return, I have been involved in various ministries. My current ones are with the Korean students in Columban formation as Vice-Rector and on weekends, I go to Moyse Migrant Center. This is the migrant center administered by Daejon Diocese. I would say that the lay missionaries have been part of my 22 years of missionary journey. My journey with them varied. At times, I journeyed as a pastoral companion. Other times, I journeyed as a spiritual director. Some other times, I was asked to facilitate workshops on Inter-cultural living, pastoral reflections, and LM meetings. But most of the times, the Columban LMs have been my companions in vocation promotion and mission promotion when I was in the Philippines. I believe this is my way of being a Colum-ban in partnership with LMs. To end, I am glad that the General Assembly in 2018 affirmed partnership “as our Columban way of being on mission...we live, to participate together in mission.” (TCM 18).

- April 05, 2021
Email ThisBlogThis!Share to TwitterShare to FacebookShare to Pinterest