It’s good to see you again online. It’s an honor for me to celebrate this Eucharist as a memorial for our Columban Lay Missionaries who passed on. I don’t know where to start this homily. I don’t feel worthy to speak about the great life they had as individuals and as missionaries. And so, I just would like to share a personal story of loss and grief and remembrance.

When my father got very ill, I was in Chicago in the middle of my course on formation. I kept in touch with my family, especially my mother on the health condition of my father. One day, my sister told me that my father was asking for me. And they thought that he might not last long. And so, I went home.

I spent time with my father for a month. His sickness didn’t make it easy for us to care for him. Oftentimes, he was relaxed, but sometimes, because of pain, he would shout, curse anyone present. He was demanding and when he was in that state, there was nothing we can do to calm him down. In my mind, I understand the terrible state he was in.

I was reading Marilynne Robinson’s novel, Home, just to pass the time. It is a story about a daughter looking after her sick father. Her name is Glory. She feels that despite all these things she’s doing for him, the father does not appreciate her because his heart is longing for his son Jack to come home. Anyway, Jack eventually came home and it became story of mending relationship, forgiveness and reconciliation.

Glory is like the elder brother of the parable of the prodigal son. In the middle of all these, there is a line that is coming from her that says, ‘I had to fight the thought that my father is now a burden to me.’

I’m not even sure now whether it was Jack or Glory saying this. However, this novel really helped me to gain perspective in caring for my father. I was glad I came home to be with him. And as looked back at the life of my father and the stories I know about him, I realized that the person’s love cannot be deduced in one particular time, the one you are feeling at the moment, but from the memory of the person’s sacrifices, hardships, generosity, kindness, gentleness, courage, concern for others and self-giving.

At some stage he felt a little better and we had a conversation.

My father said, “I am glad that you are home.”

He asked me, “How’s your studies?”

He said, “I don’t want to disrupt your studies. We’ll be fine here.”

I said, “There is no disruption, I am here on vacation.”

And he said, “It’s good then that you’re home for vacation.”

After a while I asked him, “Would it be alright if I leave after Christmas?” and he said, “of course, and I want you to go!”

While I was at home, his condition was stable although sometimes his mind wasn’t very clear. We talked. At some stage, he had difficulty breathing, but we were still able to communicate with him. And I went back to Chicago to continue my formation course. I got in touch with my family almost every day. But his condition worsened. He died in January 22, 2016. My father was 82 years old.

The experience of losing a father was one of what theologians would call a limit experience – a real sense of loss that is hard to put into rational words. No one is really prepared for anyone’s death. Death is a form of affliction we don’t have a way to prepare for it. That is the reason why we mourn and grieve. What always help me is to remember. When I go home, I bring my nephews and nieces to the grave where my father was buried and I listen to the stories they tell about him. Adults sometimes embellish the story but children don’t. And I remember my father with great joy!

I suppose the reason why I am sharing this with you is that we all go through the same experience of loss and grief for people who passed on even for someone who is not related to us by blood but we have come to know intimately or through their stories. I am thinking about Columbans who have passed on. Their death is always experienced as loss and affliction to us. For me, a few people come to mind immediately such as Pat Baker, Peter Leonard, Pat Fahey, Bill Sullivan, and others. But we remember them not with sadness but joy in our heart of having come to know them.

Sometimes, when Fin our rector here in the formation house talked about Pilar when they were in Pakistan and how close they were and told stories about her, as if I come to know her intimately too. How sad that she died relatively young. Or the Korean LM in Fiji Yeah Shin Elizabeth and how people fondly remember her even up to now. I remember with great affection Serafina who was working in Southern Chile when I was doing my FMA. Elizabeth Ordonio who came regularly to Singalong as part of family. Steve Longhurst whom I met in Mindanao with his wife Libby, and so on.

These are the people who have been washed by the blood of the lamb in their baptism and life as disciples. They have made a difference in the world by living out their faith. We honor them in our community of saints. The community of saints as Elizabeth Johnson describes as the multitude people who in vastly different ways responded to the call to discipleship. Discipleship takes on different forms in different times. They are our saints next door to use Pope Francis’ words.

The painting that you are looking at on the screen is called The Blue Horses.

This was painted by a young German painter Franz Marc in 1913. Franz Marc was conscripted for the German army after he painted this. He died in 1916 by a shrapnel that hit him in the head. He was only 36 years old. This is a quote from an art critic. 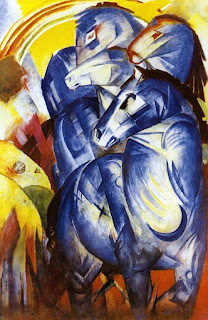 “The horses are made of latticed blue and white arcs, crescents and obliques and are set against a pulsating yellow, bleeding from the sky and raining down on a small village-scape like nuclear fallout, punctuated only by a rainbow. This most vivid of paintings is about fear. The fear of an impending war; the fear of death — a fear captured most profoundly in the hearts of that most Teutonic of subjects, The Four Horsemen of the Apocalypse, which Marc clearly alludes to here. But it is also about hope, which Marc saw the colour blue signifying and which is whispered in the distant rainbow.” (Matt Carey-Williams, London)

Mary Oliver wrote a poem about this painting. And I would like to read this as a tribute to the LMs who have gone before us.

I step into the painting or the four blue horses.

I am not even surprised that I can do this.

One of the horses walks toward me.

His blue nose noses me lightly.

I put my arm over his blue mane, not holding on, just commingling.

He allows me my pleasure.

Franz Marc died a young man, shrapnel in his brain.

They would either faint in horror, or simply

find it impossible to believe.

I do not know how to thank you, Franz Marc.

Maybe the desire to make something beautiful

is the piece of God that is inside each of us.

are bending their faces toward me

as if they have secrets to tell.

I don’t expect them to speak, and they don’t.

If being so beautiful isn’t enough, what

could they possibly say?

I feel that the lives of the LMs are like beautiful paintings, their life is their own obra maestra. It’s coming from the desire to do something for the world, so people will have the courage to hope. 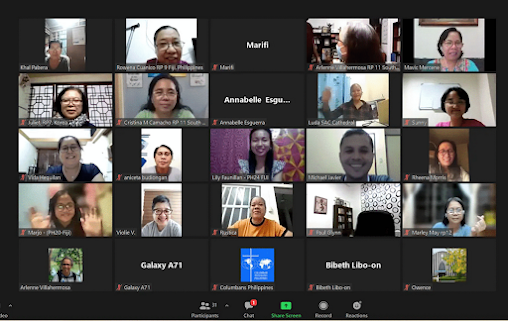 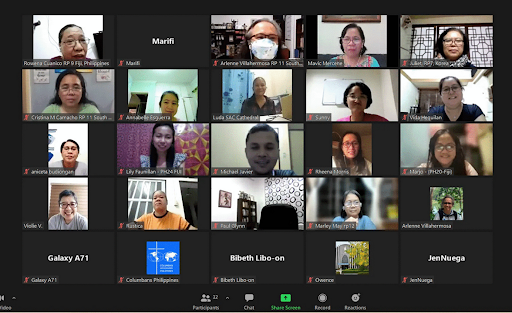 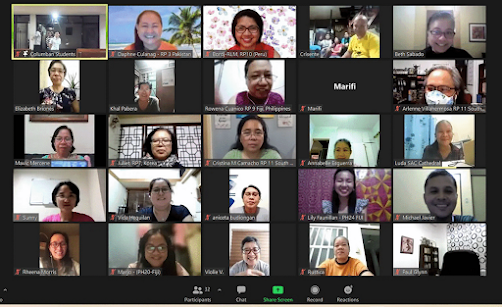 - November 15, 2021
Email ThisBlogThis!Share to TwitterShare to FacebookShare to Pinterest