RP18 - KNOW THEM A LITTLE BETTER 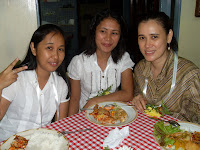 JONAH JANE ENTERINA ‘Jayjay’
Jayjay is from Cagayan de Oro City. She is the eldest in her family. Her parents and three siblings are all living in Cagayan de Oro. Her family is very much involved in the Worldwide Marriage Encounter.

She has a degree in Psychology from Xavier University. Jayjay has previously worked with Kasanag Daughters Foundation as a counselor and with SM Supermarket. She has been a volunteer for many years at the Archdiocesan Youth Apostolate based at the Our Lady of Fatima Parish in Camaman-an. Jayjay has served in leadership positions in various youth organizations, including the Canossian Youth Volunteers Program and the Dehonian Youth. Jayjay was a participant in the World Youth Day in Germany.

Jayjay learned about the Columban Lay Missionaries through her involvement in youth activities and vocation campaigns in the Archdiocese of Cagayan de Oro.

Jayjay is 28 years old.
GERTRUDES SAMSON ‘Ger’
This is a reunion of some sort with the Columbans for Ger. She was a volunteer with Fr Sean Connaughton’s Housing Project in Tondo and later with Grameen Bank in Subic, Zambales. She learned about the Lay Mission from a former LM, May Domingo.

Ger is the second in a family of four. Her mom and two siblings live in Balintawak. Their eldest has migrated to Australia. Her father died in 1987.

Ger is an architect by profession. She finished her bachelor’s degree in Architecture from the University of the Philippines and her Master of Architecture in Human Settlements from the Katholieke Universiteit of Leuven in Belgium.

Ger has worked mostly with non-government organizations (NGOs) including ALTERPLAN (Alternative Planning Initiatives, Inc.), HABITAT FOR HUMANITY, and with TAO-Pilipinas.

Ger is 40 years old. She is from Balintawak, Quezon City.
ROSALIA BASADA ‘Rose’
Rose is the sixth in a family of seven. Her father died when she was two years old. While she grew up in Samar, she finished her high school at the Sisters of Mary School in Cebu. She finished her degree in Secondary Education from Christ the King College, Calbayog City. She has taken some units for her Master’s of Arts in Religious Studies. Rose also studied Religious Education at Mother of Life.

She learned about the Columban Lay Missionaries through John Arga, a former Columban student. John was at that time doing some mission awareness work, promoting the new Mission Awareness CDs.

Rose is 28 years old.
- June 12, 2009
Email ThisBlogThis!Share to TwitterShare to FacebookShare to Pinterest