The first event was the fun run with the theme "Run for Life, Run for the World - A Run for the Missions." This was held on Sunday September 26 at the Quezon City Circle, a perfect day since there was  a good morning breeze,  no showers, and the sun rise came later than usual.  The  fun run was a good event since it really was participatory besides being an efficient cardio-vascular work-out and stress reliever.  The participants gathered at the Peace Monument at 6am and the  fun run officially started with a prayer from Bishop Edwin dela Pena and followed by the welcome remarks of Fr. Soc Mesiona.  Around three hundred men and women  joined the 4K and 6K events.  I did not take notes on who won  except in the 6K event of the women's division.  I was just happy to see that the 2nd and 1st runners up were won by two women from Myanmar while a Chinese woman won the top prize.  It was only this time that I realized how multi-cultural the participants were.  The CLM was represented by She, Jo, and Reins of RP19, this writer and her husband Butch and daughter Frances Anne, Fr. Rolly, Arlenne, and returned LM Josie Manuel.  More photos. 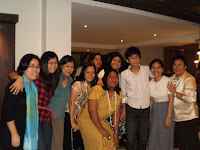 The  second event was the Lay Missionaries Ball.  This happened on Tuesday the 28th of September at the Greenmeadows Subdivision ClubHouse.  The night's event began with  "The Prayer" from Makisig and Mayumi Morales.   The audience was wowed by the performances of singing groups Hangad, Bukas Palad,  and the 29 AD Musicianeros.
- September 29, 2010
Email ThisBlogThis!Share to TwitterShare to FacebookShare to Pinterest