A CHALLENGE TO LEARN NEW WAY OF DOING THINGS 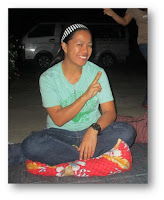 I was assigned to work in Ba parish, a Columban parish situated in the western region of the island of Viti Levu, Fiji. I was also involved in the diocesan evangelization program for the youth of the western region. So part of my ministry was working with the young people.

Before I joined the CLM, I was privileged to have worked with young people for over a decade during work life.  As a teacher by profession, I was used to a classroom style of teaching. For me the venue for teaching is within the four walls of the classroom. As the teacher I stood and my students were on their seats and I taught my students within the time frame I am expected to teach.

This time, in the new culture I found myself in, I was challenged to learn new way of doing things. I learned to ‘teach’ in a different way. I found myself gathered with others around the ‘tanoa’ and sitting on the floor. The gathering is not bound by time. Time took a different meaning too. The essence of being gathered around the ‘tanoa’ is to be present and it doesn’t matter how long it will take. So I learned to share time with them around the ’tanoa’. The atmosphere is more relaxed in contrast to the formal set-up of a classroom. More often there is a good interaction among the young people gathered on the topics I wanted them to absorb. However, I haven’t always succeeded. There were times I found myself teaching theoretical concepts and principles. Each time I do so I could see a few sleepy eyes, some staring out blankly and worse others stretch their arms and yawn openly, giving me a clear gesture of perhaps boredom and lack of interest on what I was talking about. I found that whenever I tell a story - especially a life experience - I get their attention back. For those precious moments I was able to get them focused again. In my experience whether inside a classroom or around the “tanoa”, if people are quiet and don’t say anything for a long time something is wrong. The silence could be a sign that the teacher or speaker is not really connecting with the students or their audience.

Young people learn best when they get personally involved in the process of learning. When they argue, disagree or question because at the end they will eventually discover the truth for themselves. This scenario applies to every young people whatever and wherever they come from. Meeting and living with these young people has not been easy for me. There were trials and challenges that came with it. It was a bit of a struggle, even spiritually. Frequently my listening skills were challenged. This was the most difficult part for me to put into practice. It took time to know them and love them more deeply in order to connect with their world. I have learned the hard way! Jesus during his public ministry had struggles too and I am always reminded of it. I believe that we are blessed when we persevere in the midst of trials and challenges that come along the way because having been tested, we will have life that the Lord has promised to those who love him in faithfulness.
- November 08, 2016
Email ThisBlogThis!Share to TwitterShare to FacebookShare to Pinterest