Behind a tattoo is a story 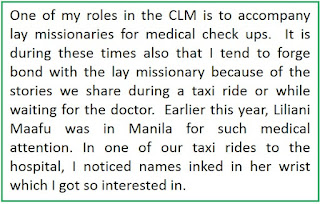 
Liliani Maafu, from the Kingdom of Tonga, one of the many islands in the South Pacific, arrived in Manila on the 28th of December 2015 with two of her team mates. After only a few days in the capital, they flew to Cagayan de Oro to spend the new year with the lay missionaries assigned in Mindanao. Right after new year they again moved to Davao City for six months studies of the Cebuano language. Now she is assigned at the Barra Chapel as well as in women’s ministry of the Archdiocese of Cagayan de Oro.

Liliani has met many people in and out of her ministry and every time she tells them where she comes from, she is always bombarded with more questions like: Where is Tonga? Is it in Africa? Who is the president of Tonga? Oh, you do not have a president only a prime minister? And you have a king? What is the money (currency) in Tonga? And so on and on and on. Later, she realized that some people just want to make a small talk as a sign of respect and they do not really mind what your answer is. So one time, she told someone that she is from Hawaii and he seem satisfied with her answer and no more questions followed.

Liliani has been in the Philippines for almost 3 years now as a Columban Lay Missionary and she feels overwhelmed with the graces she has been blessed with through her many experiences, some funny, some good, some not so good, and there are also ordinary daily experiences which made her stop, think and contemplate. An example is this: One morning in a jeepney ride going to her ministry, she sat beside the driver. She felt the driver’s curiosity on her. When she paid her fare, he asked if she was a foreigner. She said she was a local but he did not believe her because of her accent. She told him she had been away for quite a while, hence, the accent. The jeepney ride continued and he noticed her t-shirt which at that time was a red T-shirt with the Columban logo on the left breast. “Are you a missionary?” he asked, and with quiet pride she said yes. “Why do you serve the Lord?” he asked. She was taken aback and kept quiet for a while to gather her thoughts and then she said “because this is the right thing to do”. He kept quiet. Few minutes into his silence, he noticed and pointed at her right wrist and asked, “Is that a tattoo?” he asked. She nodded. He looked surprised and incredulous and asked, “Why does a nice lady like you have a tattoo?” She looked at him perplexed and said, “Why not?” The driver went on to say that he always had bad impression of girls sporting tattoos. In his opinion women with tattoos are loose and not supposed to serve the Lord. But he looked at her with what seemed like admiration and said, “Yet here you are, a nice lady with a tattoo serving the Lord.” And when she looked at him, she saw that he was also sporting tattoos in his arms up to his shoulders and she threw back his own question. “Why do you say all these when you yourself have tattoos?” she asked. “Ooh, this is different. I can have tattoos because I do not serve the Lord,” he said. “That is not true,” said she. “What difference does a tattoo make to a person? What is important to the Lord is the heart, what is in one’s heart, not how one looks like on the outside. The LORD doesn't see things the way we see them. People judge by outward appearance, but the LORD looks at the heart.” After a very long pause he said “Now, I will never look at women with tattoos the way I used to. Thank you.” Liliani’s heart rejoiced with this enlightenment.


Back in Tonga, tattoos are quite common among men. It is a cultural thing.  But tattoos are not common among girls and women.  When Liliani was in high school, she met a girl from another island who was in the same class as her.  They became very close and as a sign of their new found friendship they vowed to have their name tattooed on each other. Young and foolish Liliani was then, the promise was just a half hearted one for her.  But when classes ended and just before going back home, her friend tagged her along to see a tattoo artist and to have the tattoo they promised.  Her friend went under the needle first and she had Liliani tattooed on her back.  Even at that very moment, Liliani did not know if she really wanted to have a tattoo, let alone her friend's name.  Her friend kept asking where to have her tattoo. Again, Liliani did not know where to ink her friend's name in her body.  Liliani want it hidden since her father will not approve of any tattoo, at the same time she did not want to expose her body to a total stranger who will do the tattoo.  So she decided to have Melania Waqa on her right wrist. This tattoo is a piece of art and symbol of friendship. 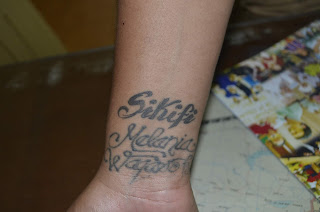 After the death of his father few years back, four of her brothers had their father's name Sikifi tattooed on their body.  Liliani had hers only last year when she was missing her family, most of all her father.  Putting her father's name on her wrist was to honor him and to let him know that gone he may be but never forgotten.  This tattoo is a permanent memorial, a remembrance tattoo to an unbreakable bond of a daughter  to her father, a daughter's love and reverence big enough to merit an art in her body.
- September 27, 2018
Email ThisBlogThis!Share to TwitterShare to FacebookShare to Pinterest