Stoicism and Courage in the Face of the Wind 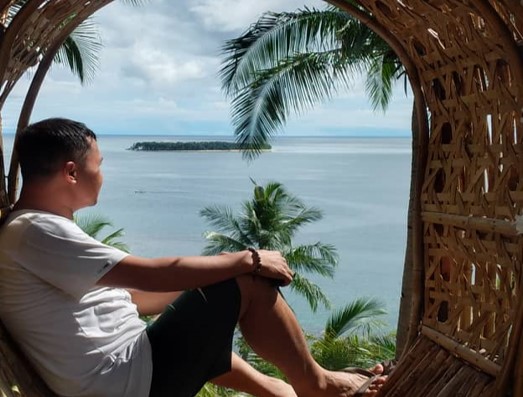 On the evening of December 16, 2021, Typhoon Odette swept through some areas of the Visayas and Mindanao in the southern Philippines.  Areas like Surigao del Norte, Dinagat Island, Siargao Island, Bohol, Cebu and some parts of Negros were particularly hard hit.

My home village of Barangay Jubgan in San Francisco, Surigao Del Norte suffered strong winds and heavy rain.  The seas were disturbed causing a storm surge that crashed huge waves against the shoreline.

People, especially those living near coastal areas, were terrified, fearing for the loss of their lives and belongings. In their helplessness, all they could do was watch and wonder what would happen next.  Their biggest fear was landslides, as our village is located at the foot of a mountain riddled with the tunnels of illegal mining.

Fortunately, the mountain held firm, but the next morning the typhoon moved on towards nearby islands, leaving a low barometric pressure across the village causing roofs of building as big as the local church to pop off.

Coconut trees and power poles no longer stood erect, left reclining in a broken state on the ground. The crashing waves had smashed the precious boats that support fishing, the principal industry of the village, and the pull of the receding tide sucked their remains out to sea.

There was no electricity, no water, no flicker of internet connectivity and for most, no food.  Access to the nearby city was blocked, as landslides had covered the only road, so not even essential relief goods could be brought in. It took days to clear.

The fishing boats were gone, the fisher folk that keep a natural food supply coming into the village could no longer navigate the now calm waters.  Shortages sent the price of everything through the roof. People picked and hacked their way up the mountain, but even high up, crops and cooconuts lay wasted. Everything was gone.

It was a week before I could contact my family from where I was working some 300 kilometers by road away in Cagayan de Oro.  I was relieved to hear they were safe after my long days of anxiety. They suffered a lot in the aftermath of the typhoon, but did survive, even though the cost of everything from fuel and food, to water and other essentials had skyrocketed.

Banks were closed and there was no travel to other centers where they operated, so even their little savings could not help, nor could relatives, like myself, send anything to help them out. Like those with no savings or near by relatives, all they could do was wait for assistance from the local government or non-government organizations.

I was devastated when I saw photographs and film clips of my hometown, bereft of the familiar sights and signs of my favorite places.  They showed only a face of destruction and misery.  I shared them with my friends, but said nothing. Some understood my unspoken cry for help and gave some money. Eventually, when I could send it, my family spread it around and about 20 people were at least able to eat on one day.

Over six months later, many people are still waiting for assistance while others try to rebuild their homes and livelihoods. They put on a brave face, despite the trauma Odette has inflicted.  Such is the lot of the Filipino, a people called to push their stoicism and courage to the fore on far too many occasions.

- August 10, 2022
Email ThisBlogThis!Share to TwitterShare to FacebookShare to Pinterest