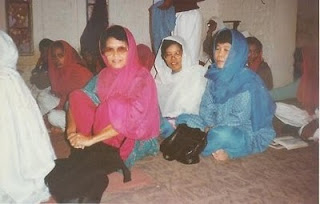 RP1 : Pilar Tilos (in pink), Emma Pabera (in blue) and Gloria Canama (in white) during their first year in Pakistan

It's been 20 years since Mission Sunday 1990 when two teachers from Negros and a former Missionary of what is now known as the Philippine Catholic Lay Mission (PCLM) tearfully said goodbye to their family, friends and the whole Columban Community in the Philippines to serve the people of Pakistan. Pilar Tilos, a music and physical education teacher, served in Pakistan until her untimely demise in January 1995. Emma Pabera, a high school principal, completed one term and continued to work with the Columban Lay Mission as a member of its formation staff. She retired in 2006 to be with her aging father. Gloria Canama, the third member of the team, went on to continue what they, collectively known as RP1, started. Except for a three year stint as Lay Mission District Coordinator in Mindanao, Gloria spent most of her Columban missionary life in Pakistan working with Filipino migrant workers, Pakistani women, and with ecology issues.

During the mass celebrating her 20 years as a Columban Lay Missionary, Gloria expressed how her passion to serve was fired by nothing but LOVE, i.e, love for the people she journeys with, love of Pakistan, love to the Columban Lay Mission.  Later that evening, a mini-concert was spontaneously held in her honor.

Gloria returned to Pakistan the following day. And to borrow her own words, "I've never been used to saying goodbyes... so am still befriending the pain of leaving home and the familiar... the pain and grief of coming back to Lahore and once again feeling the absence of Pat and Tanvir... I do need your prayers."